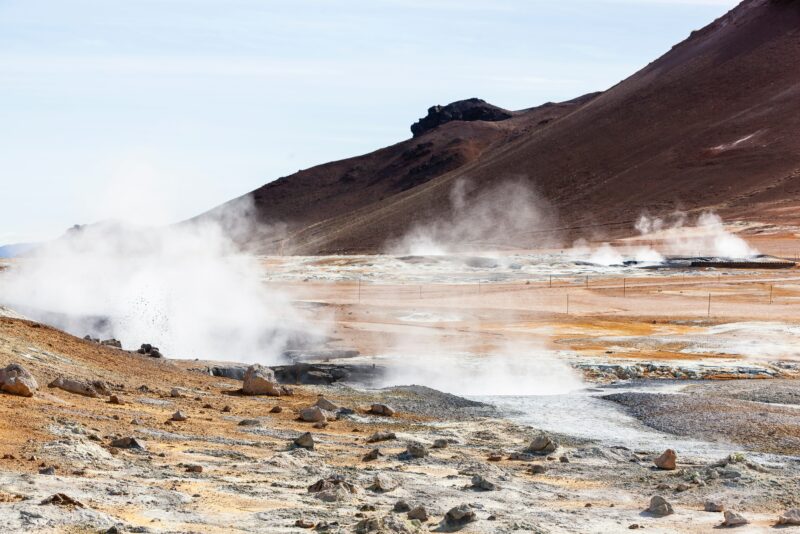 Commercial and residential fossil fuel combustion is the source of 12% of U.S. greenhouse gas emissions, according to the EPA. Fortunately, there’s an alternative. Without emitting any greenhouse gases, home geothermal taps into thermal energy generated and stored in the earth to heat buildings in the winter and cool them in the summer. We know this can work at scale; in fact, 1 in 5 homes in Iceland use residential geothermal energy.

Even in the dead of winter, the soil a few hundred feet below the surface maintains a steady temperature of 50 to 60 degrees F. Underground pipes called ground loops circulate a fluid that absorbs this heat from the earth and transports it to a heat pump sitting in the home’s basement. The heat pump extracts the heat from the fluid and uses it to warm air, which is pumped through the house’s ductwork to heat the home. To cool the home, the process works in reverse, extracting heat from the air inside your home and pumping it into the ground.

Home geothermal has been expensive

In 2018, I received a $45k quote for a geothermal heating and cooling system for my 2,000 square foot house in Hudson Valley. The price tag has remained high in part because of an antiquated, non-standardized, unscalable installation system. A crew would measure, drill, and create a bespoke system that would fit a specific house. The predominant customer was a well-off person who cared about the environment. Payback was abysmal; folks weren’t buying for short term savings. Penetration of home geothermal in the U.S. remained low as a result.

Then Dandelion Energy entered the industry

The team did away with bespoke installs. Instead, they came up with one standard SKU for their heat pump, and offered it in four different sizes.

Then, they moved several heat pump parts from hardware into software — significantly reducing the cost of the heat pump.

It was the third move that flipped the switch for homeowners. By making key moves to modernize the technology, they reduced the cost of a geothermal system down to the magic threshold of $30k, and $18k after federal tax incentives. Customers were seeing payback periods of 3–7 years, an order of magnitude faster than before. All of a sudden, buying geothermal became a smart financial choice and a way to help the environment.

The install is messy.

Here’s what happens today. Two trucks dive onto your yard. One has a big drill; the other carries the ground loop pipes. The first task is to drill a small hole for the pipes. This is a messy process; installers construct makeshift fences to contain the mud. Once the hole is finished, steel casings are dropped in to reinforce the hole, and the ground loop pipes are fed in afterwards. The pipes then need to be connected to the heat pump in your basement. The process typically takes a couple of days to complete.

The good news is that there is plenty of room for technology to make installing geothermal faster and cleaner than ever before. In the near future Dandelion customers will be able to install geothermal in less than a day without disturbing their yard. This is the future we are investing in.

As an investor and a homeowner I’m impressed with the team’s ability to take a fresh approach to bringing geothermal energy into more homes. Dandelion Energy represents Comcast Ventures’ first renewable energy investment as we joined GV in co-leading a $16 million Series A funding round, along with Lennar (the largest homebuilder in the country) and other investors. We are thrilled to partner with Kathy Hannun, Dan Yates, James Quazi and the rest of the team to bring clean and affordable, renewable heating and cooling solutions into the homes in the United States.

With geothermal systems making up just 1% of the market now, and with Icelanders well ahead of the trend, we have some ground to cover… or rather more ground to dig.

Investing in Affordable Geothermal Energy was originally published in The Forecast on Medium, where people are continuing the conversation by highlighting and responding to this story.