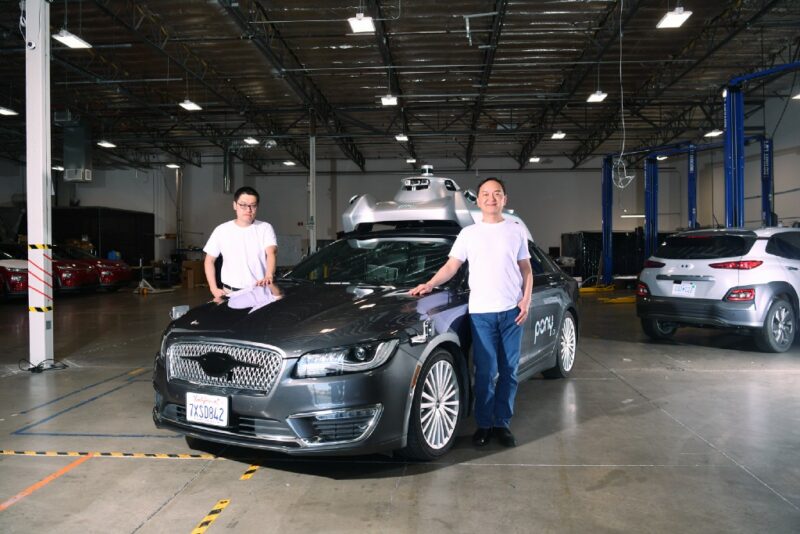 Pony.ai CEO James Peng shares insights on the importance of human talent in the development of autonomous vehicle technology

It’s happening. A fleet of electric, autonomous cars equipped with Pony.ai technology are transporting customers on public roads in Irvine, California. It’s no surprise that the team at Pony.ai is accelerating research and driving forward one of the state’s few ride-hailing pilots.

After serving as the Chief Architect at Baidu, overseeing the entire technical stack for their autonomous driving division, James Peng was ready for the next chapter. He was passionate about bringing great people together to solve challenging problems and the upcoming global transportation dilemma was one he understood well. Three years ago, James founded Pony.ai and started on the journey to build the safest and most reliable autonomous cars with a world-class team.

Moving fast was key. In recent years, artificial intelligence (AI) has gained a lot of attention for its growing popularity among innovators and the potential impact on everyday lives. Peng predicts that thousands of autonomous vehicles will be on the road within five years. With his co-founder and CTO Lou Tiancheng, Pony.ai quickly and carefully opened headquarters in Silicon Valley and China and launched an autonomous driving fleet through PonyPilot to the public.

Beyond the startup’s fast growth and expansion in the industry, Peng has a fascinating story to tell about the best part of the autonomous vehicle innovation: the people.

To help bring the autonomous vehicle industry to the next level, what kind of people do you look for?

The technology space creates more jobs in areas like software, hardware, mechanics, electronics, finance, and drivers. All of the most innovative companies are looking for talented people who share the same vision and passion. Compared to other industries, the autonomous car industry generates a variety of jobs in different areas that appeal to people across their career journeys.

For the Pony.ai team, we look for people who see the bigger picture, the impact that we can have on public safety, and our role in creating technology that earns trust with customers. That means people who obsess about details fit in really well at Pony.ai.

At Pony.ai, we are not building the whole car, but retrofitting vehicles to drive autonomously. So, we’re also looking to partner with automakers to prepare cars for the AI technology during the factory assembly lines. There are new opportunities to create new jobs and redefine existing ones in each step of the process. We have mechanics for example that are trained specifically on the maintenance of autonomous vehicles.

How do you keep an ambitious and world class team engaged and focused?

Pony.ai is training this new talent force within this emerging industry. I feel that the talent we train is essential in helping the industry advance.

We don’t fear challenges. We invite them. We prioritize rigorous testing to push the technology hard — failing, fixing, and evolving is the only way to make the autonomous cars safer and scalable.

We realize that it’s important to be persistent. There are many legal implications when it comes to public safety. It’s our responsibility to partner with regulators so we can work together to advance our industry and bring the benefits of autonomous vehicles to consumers and communities.

The Pony.ai team knows that we are still in the early phase of this industry. We need to be patient. It will take a while for costs to come down as we work to increase production. But we are headed in the right direction and keeping pace to bring thousands of autonomous cars and trucks to our roadways in the next few years.

What sets Pony.ai apart from other companies in the autonomous vehicle industry?

There are several things that makes us different. One differentiator is that we started with a fully optimized approach. Currently, autonomous driving is still a complicated system. There are just so many components involved. Early on, we took on a fully optimized approach so whenever we might encounter a problem, we can figure out a globally optimized solution. From the beginning, we recognized the importance of building our own infrastructure. For example, we made the decision to build our own software operating layer early on, when most players in the space were still using ROS (Robotic Operating System), an open-source product, as their main framework. Now it’s considered standard to be building and optimizing your own operating layer. The first employee we ever hired is actually an infrastructure guy.

Execution speed is another advantage. In three short years, Pony.ai has tripled in size. We have the ability and agility to move fast. Our technology develops at an accelerated rate because of the emphasis we place on iteration cycles, while pushing to test the technology in different environments: Silicon Valley and urban Chinese environments.

Why expand and set up your North American headquarters in the Bay Area?

There are several reasons for being in the heart of Silicon Valley. Pony.ai has three different driving testing areas–Beijing and Guangzhou, China, and California. Traffic conditions and traffic behavior are different at these locations. The advantage is that the AI algorithms have much richer data to learn from when we incorporate these diverse test sets.

We also want to be at the center of innovation and global talent. While our vision for autonomous vehicles is on a global level, Silicon Valley is spearheading a lot of advancements in the mobility industry. We wanted to tap into the global talent and help contribute to the growing industry by creating jobs.

Many of our Pony.ai team members are coming from top Silicon Valley companies. My co-founder, Tiancheng Lou, was a Google top coder and worked on autonomous vehicle technology at Google X before it became Waymo, and our engineering leaders come from top tech and vehicle companies in the Bay, like Uber, Google, Facebook, Tesla, and NVIDIA. Physical proximity to talent matters.

What advice would you give to new entrepreneurs in artificial intelligence?

Regardless of industry, there are some standard tips I can offer entrepreneurs.

In our Founder Spotlight series, entrepreneurs from our portfolio companies share insights about the problems they’re working to solve, tips on how to build new companies, and valuable advice to new entrepreneurs.

Driving Innovation and Paving the Way for New Jobs in the Car Industry was originally published in The Forecast on Medium, where people are continuing the conversation by highlighting and responding to this story.