Imagining the Future of Transportation 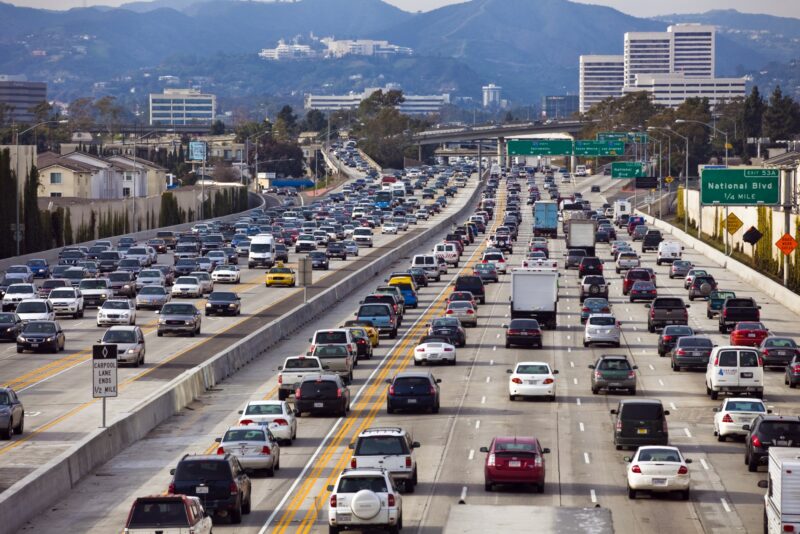 Urban commuters have a plethora of ways to get from point A to point B. Outside of bending space (for you quantum physics geeks), you might choose to drive your own car, take the metro or bus, call a Lyft, take an e-scooter, or even bike or walk depending on your location, time and personal considerations.

Each of these methods of commuting comes with its own pain points — some of them so taxing, they leave you thinking “never again.” Maybe you’ve wasted hours sitting in traffic, or waiting for a train or bus. Maybe you’ve requested a rideshare but realized it will incur a surcharge or will take a circuitous route to reach you.

Ultimately, it’s a lot of time spent waiting. In fact, American commuters waste an average of 54 extra hours a year stuck in traffic, according to a 2019 report from the Texas A&M Transportation Institute. This number is even larger for people in major cities, with Los Angeles clocking in at 119 hours of time lost. And many of the perceived fixes don’t actually work — ironically, making roads wider actually increases the amount of congestion over the long run. If time really is our most valuable asset, can you fathom losing 2–5 days a year in traffic? It’s like Vizzini from The Princess Bride says: “Inconceivable!”

Beyond frustration, traffic congestion also has measurable economic and human impact. In 2018 alone, this time spent in traffic translated to $87 billion in lost productivity, according to transportation analytics firm INRIX. There are a whole gambit of problems plaguing transportation systems: Delays and inefficiencies, safety hazards, and significant environmental concerns.

Starting with safety, in 2018, there were an estimated 40,000 traffic fatalities in the United States, an alarming number but one that has stayed fairly constant across years — a surprisingly favorable trend line on a per capita basis since the number of drivers has risen. Nonetheless, it represents a massive public safety crisis. Globally, more than one million people die in road crashes annually, according to the Association For Safe International Road Travel. This doesn’t account for the injuries, medical bills, and human despair — it’s horrifying.

Reimagining and investing in the future is the next step toward a better transportation network.

And transportation continues to play a major role in climate change, making up 29% of carbon emissions in 2017, according to the EPA. We’re all complicit in entrenching a transportation system that’s regressing the human condition.

Widespread public acknowledgement is the starting point for better, cleaner commuter transportation. Reimagining and investing in the future is the next step toward a better transportation network. It is not a single fix, but rather a confluence of different course corrections, pun intended, that work in tandem in what we might call an “intelligent transportation network.” It will take better carpooling and coordination through rideshare and public transportation, a modernized regulatory environment, improved automation and machine coordination, and more readily available and innovative modes of transportation built to suit use cases — like bikes, e-scooters, and maybe even ​hybrid-electric vertical takeoff and landing (eVTOL) in the future — and the infrastructure to support them. Ultimately, it will require a kind of “smart city” — one where traffic lights better suit flows of traffic, transportation options are available and optimized across traffic patterns and various legs of a route, and real-time data is available and platform ready.

The Building Blocks of The Future of Transportation

What are the building blocks of an intelligent transportation network? Data, data, and perhaps more data.

Imagine a world in which effective multimodal transportation is a reality, giving consumers the best options to safely and efficiently get to their destination. It wouldn’t simply be the emergence of new transportation methods, or technological advances for existing vehicles — but rather a smart solution for how such advancements fit together, supported by data platforms that enable secure interoperability. In simpler terms, a world where different, sophisticated modes of transit work together in harmony to address each individual traveler’s needs.

This smart city would implement predictive models of demand and load leveling to make these varied transit options fit together. Commuters could choose between public transit or driving in their own semi-autonomous vehicles that would share the road with e-scooters, despite moving at different speeds. Data collected from sophisticated sensing technologies and AI-powered edge network computing platforms, like Xtelligent, underpin a smart, preemptive signal control network, integrating everything from traffic signal timing and vehicle movement to public transit buses to the cars that you and I drive every day. It would ultimately create the kind of coordination between transit options that has, previously, only seemed vaguely imaginable.

Such a model would know when folks are traveling from, say, Evanston to Chicago, giving consumers plenty of seamless options that account for rush hour traffic. If they drove themselves, they could feel confident that signalized intersections were optimized to control the flow of traffic. Public transit systems and rideshare options would be trackable by app, and optimized to suit the ebbs and flows of traffic. To top it off, there would be options for in-between distances where walking is unfavorable or infeasible — maybe they’re running late or it’s a humid day — and driving, taking public transit, or hailing a rideshare is inefficient or impossible. Maybe they’ve just gotten off of public transit and it’s that last segment of their commute. In these cases, e-scooters and bikes would ferry them to their final destination.

This tech-driven coordination would incur many benefits. Better coordinated traffic would mean shorter commute times, and fewer cars vying for space on the road — translating to fewer accidents. This, paired with availability and usability of e-scooters, would reduce carbon emissions. An automated transit network might even help rideshare apps fight congestion (rideshare apps have, ironically, increased the number of cars on the road). An automated transit network could eradicate this congestion — perhaps by even encouraging people to take shared trips through UberPool or Lyft Line, as the aversion to these shared amenities is often due to the length of time it takes to get picked up and dropped off.

This vision of the future will not only necessitate technological advancement, but also municipal investment in smart city infrastructure. To some degree, cities are already investing in smarter transit. Think about some of the existing responses to traffic patterns that happen throughout the day — subway systems that have more trains during rush hour and enforce higher fare, congestion taxes in downtown regions, and Bird scooters powered and ready at destination metro stations during rush hour traffic. Open up Google Maps, and many local Los Angeles buses are trackable on the map — a courtesy that gives commuters the ability to schedule and estimate their arrival time. Waze knocks the cover off the ball here.

Major cities are also already investing in safety infrastructure through programs like Vision Zero — a city of Los Angeles project to reach zero traffic fatalities (for drivers, pedestrians, and cyclists) by 2025. These programs often focus on improving streets in “high injury” zones by adding legible paddle signs and refuge islands between large crosswalks to improve pedestrian safety, and adding common sense signages like speed feedback. Many of these changes are effective at reducing accidents. The Federal Highway Administration offers an example in Florida, where constructing a median opening that allowed drivers to make midblock U-turns reduced crashes by more than 26 percent.

Autonomous vehicles are not yet the panacea they had been projected to be.

But it can be better. Tech giants like Alphabet are already envisioning what a fully-integrated, data driven smart city might look like, through their Sidewalk Labs project on Toronto’s Eastern Waterfront. Their goals are ambitious — with aims to save households a projected $4000 a year by improving cycling and public transit options. But a smart city doesn’t have to mean literally overhauling an entire city’s systems and infrastructure. It means investing in systems like smarter traffic management, incentivizing and discouraging the usage of certain transit options through pricing, and creating infrastructure to ensure safety and protection for those using alternative transportation methods (like bikes and e-scooters) while on roads.

The last piece of this puzzle involves automation. Autonomous vehicles (AV) are not yet the panacea they had been projected to be. In fact, Ford’s chief executive, Jim Hackett, told the New York Times they “overestimated the arrival of autonomous vehicles.” Roads, lights, and vehicle OEMs don’t yet have the dedicated infrastructure, sensors, and communication protocols to fully support v2v (vehicle to vehicle communication) and v2x (vehicle to everything communication), and hardware costs can be prohibitive for those who had hoped to make these vehicles mass market for individual ownership — although they remain promising for mobility-as-a-service (MaaS) rideshare operators. There have been major technological leaps on the path towards autonomy, and the principles of v2v and v2x are already being incorporated into vehicles and city infrastructure in beta tests to share information and critical data. The services built on top of this data unlock next generation telematics, routing, real-time data analyses, vehicle selections, and decentralized decision making at the network’s edge.

This commuter transportation revolution would benefit and accelerate innovations across the commercial package/cargo transportation and logistics industries that are undergoing their own reinvention.

This vision of the future, of course, comes with its challenges.

As much as technology can accomplish on its own, it can fall short of advancing the public good, unless local municipal and state governments overcome common objections — cost, risk, and punting on solving systemic problem because they have little incentive to act — essentially getting caught up in omission bias or loss aversion. So instead of focusing on “can’t,” entrepreneurs, investors, and enlightened industry veterans are focused on what can we do, even if it’s incremental and requires laying data building blocks to unlock the art of the possible.

Investing in these future technologies — and even further reaching projects with impressive potential or aspirational seeds, like the Hyperloop, eVTOL, or SpaceTech — give us a glimpse into what a better future of transportation might look like. In this future, we’re safer, less burdened with wait times, and our environment is ultimately more sustainable. In lieu of building the shortest path from point A to B by bending space, it will take our collective efforts, behavioral changes, and yes significant investment to build an intelligent transportation network — one that improves the human condition for everyone.